We buy inventory so you don't have to. 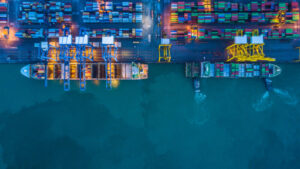 The Yantian port in China has found itself in the recent news cycle as the latest example of disruption in the 2021 supply chain.
In the Guangdong province, where Yantian is located, more than 150 COVID-19 cases have recently been reported, which has triggered the local governments to reinstate strict prevention and control measures. To date, 79 container vessels have been rerouted as Yantian continues to operate at only 45% capacity, but with neighboring ports already operating at over 90% capacity, many analysts are seeing the makings of a disruption that could be significantly worse than the recent blockage in the Suez Canal.

“One of the biggest ports in China has basically closed down for close to three weeks. They have some berths in operation, but nowhere near enough”, said Nils Haupt, communications director at the German shipping line Hapag-Lloyd in a BBC article. “You can use ports like Shekhou, you can use Nansha, you can use Hong Kong; but what we’re seeing right now is that delays are piling up there as well,” he says.

As of last Thursday, the world container line Maersk increased their expected delay times from 14 days to 16 days, but many warn that this is only the beginning. The coming weeks are expected to be far worse, and a resolution may be months away.

“Congestion will rise significantly, meaning that ports, and especially those already suffering such as Felixstowe, will be heavily impacted,” said Alex Hersham, CEO and co-founder of supply chain technology company Zencargo in an article from The Load Star. “The scale of the issue in South China is already bigger than Suez…Two accurate metrics to measure disruption by are days of delay and teu; in both cases, Yantian far surpasses what happened with the Ever Given.” Hersham goes on to say that we are now entering what is “an era of unpresented disruption.”

The most sobering fact of all coming from the Yantian port crisis is that even when the effects of COVID-19 are resolved — a process that may take years — these recent events continue to highlight the fragility of the modern supply chain. If current structures wish to survive the next great disruption that will inevitably occur, a radical rethinking of the supply chain is an absolute necessity. Questions must be asked, such as where the biggest weaknesses are, and what can be done to insulate these large, multi-tiered supply chains from risk.

This may include a rethinking of the role last time buys may play, and when in the production process the largest quantities of inventory should be purchased. Solutions such as Partstat Inventory Ownership Solutions, with their ability to help customers purchase and store inventory at the beginning of production, should play a major role in these discussions.